Birds of a feather flock together.  People tend to surround themselves with other people who are most like them, such as a friend, companion, or even certain family members.  What does it say about that person when the people closest to them act a certain way?

What about close friends who are either racist or xenophobic, misogynist, a white pride nationalist, insecure, aggressive and even violent?  Would you continue to surround yourself with those types of people if you yourself were not like them and you disapproved of their behavior?

Kris Palmer, candidate for Sheriff, hasn’t cared to vote in past elections and lives in a different county.  He has close family and friends who commit Muslim bashing, liberal bashing, hatred towards women, and sees you as a terrorist if all you do is use your First Amendment rights to merely “seek to remove flags, statues, engravings, and other pieces of our history from the public square.”  In other words, if you redress government for your grievance, and seek change, then in his opinion, you are the same as an ISIS terrorist. 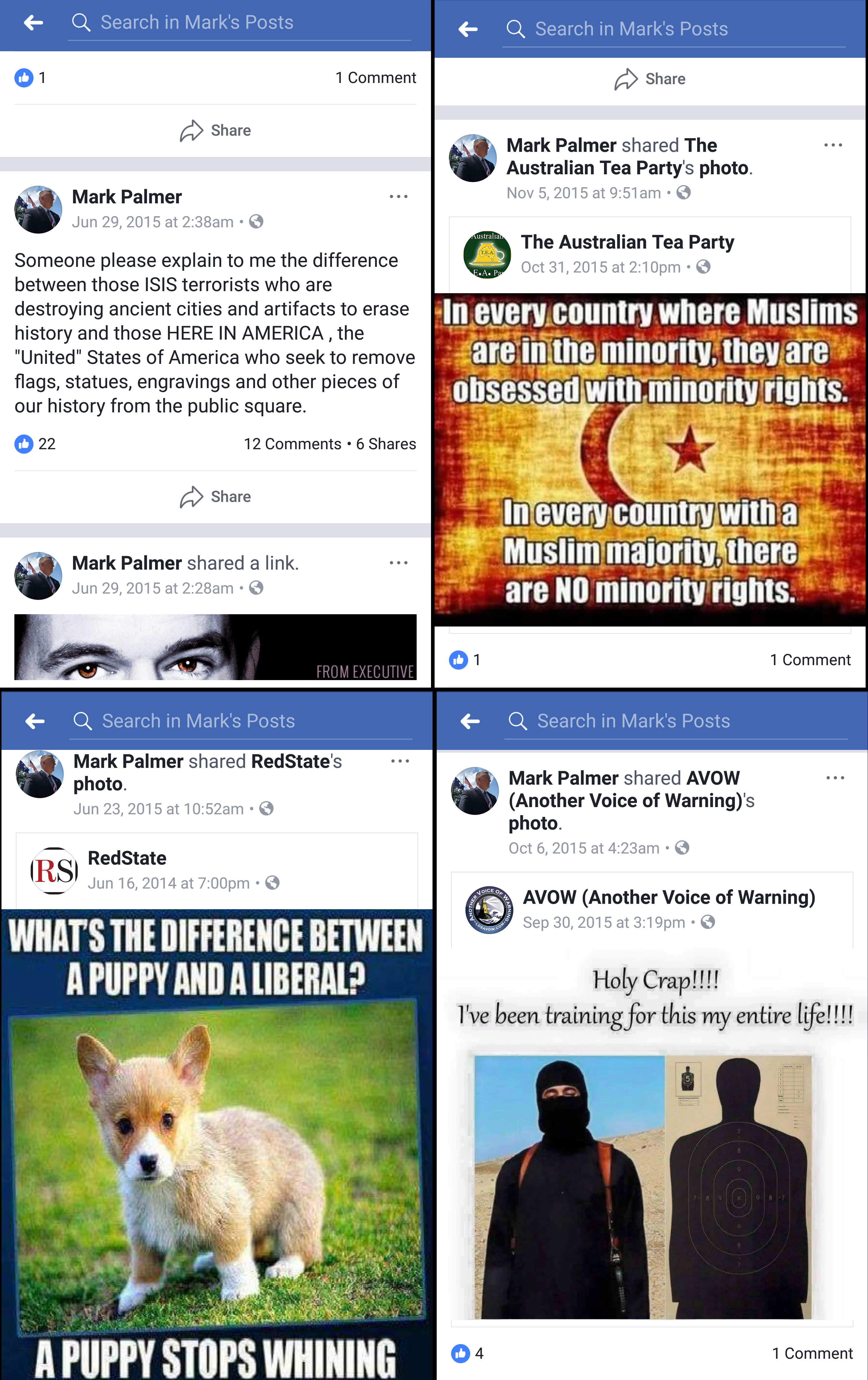 Mark Palmer was endorsed and supported by Kris Palmer, during Mark’s failed campaign for State Senate.  These were Mark Palmer’s posts during his campaign, as he appealed to the types of people who would support him.

Kris Palmer was a manager during the Sacramento Sheriff’s Department’s worst lawsuit in its history over numerous proven acts of sexual discrimination, racial discrimination, records falsification and forgery, and retaliatory investigations against victims who filed complaints against the Department.  In 2016, at the end of the 6 year long case, one juror summarized the Sheriff’s Department as a “culture of retaliation.”  (Case 34-2010-00091514, Sacramento Superior Court)

While these abuses were going on at North Station and the jail right under his nose, Kris Palmer not only failed to properly report those complaints up the chain of command as he is required to do, but he did nothing to stop the illegal acts, and failed to shield the victims from retaliation by co-workers under his command.

Palmer’s best drinking buddy, and campaign representative, was sent out to find and intimidate citizens who asked too many questions.  In the below, a Sacramento Taxpayers asked about violations of overtime policies, and requested under the California Public Records Act (CPRA) to obtain budget documents and of course about the case.  Here is what Kris Palmer’s representative had to say about it:

If you are a woman, or a democrat, or a Muslim, or a concerned Sacramento taxpayer, then Kris Palmer, his family, and his friends, see you as the enemy.  This is not the type of person we should give more power to, and certainly not a person we should elect to higher office.  He hasn’t cared about voting in any of the previous election, and hasn’t cared enough about Sacramento County to even live here.  Kris Palmer is a carpetbagger, a bully, and an embarrassment to civil rights.

The Sacramento County Sheriff’s Department needs a complete leadership overhaul, beginning with who is elected as Sheriff.  It is going to take someone from the outside to come in and clean up the department.  An insider, who has been part of the problem, can never be expected to bring about the changes necessary to bring forth the integrity, transparency, and equality to the Department that Sacramento taxpayers deserve.